Joseph and Ann Abram (nee Cox) were my great great great grandparents. I have been able to locate the couple on the 1861 census, where Joseph, a shoemaker aged 23 and Ann aged 21 were living at 4 Lower River Terrace, St Sepulchre in Northamptonshire with three children, Emma, Charles (my great great grandfather aged 1) and Harriett.

I believe Joseph was the son of James and Rebecca and I have located him on the 1841 census aged 3 and the 1851 census aged 12. Sadly, it appears that Joseph died aged just 28.  The death certificate shows he had been suffering from Phthisis Pulmonalis (Tuberculosis) for 13 months.

Ann appears to have married William Maloney in 1869 to and her story continues on the 1871 census, where, aged 31, she is living at St George Square in Northampton but now with William Maloney of Ireland, Charles (aged 11 and recorded as Charles Abram Maloney) and three other children, George, Emma and John W Maloney.

* Jeremiah Maloney does not appear on the 1891 census with his mother and siblings but I believe I have located him, aged 19, living as a boarder at Luther Street, Leceister in the home of William and Sarah Abrams (both recorded as being born in Northamptonshire) and their children Herbert and Amy, along with two other boarders,  Ellen Maloney aged 24 and and Eva M aged 1.  (I believe that Jeremiah Maloney married Ellen Frost in 1889).

Putting together these pages, I have felt incredibly fortunate to know so much and have so many photos of my family and I am indebted to Margaret Creighton (nee Abram) for sharing so much of the Abram family history with me.

Margaret is my dads second cousin once removed and the daughter of Reginald Abram, one of the many children of my great great grandparents Charles and Emily. After the first world war ended, Charles and Emily stayed in England and Charlie and Millicent (my great grandparents) settled in England too but many of the family emigrated to Australia, with Reg going in approximately 1922 – 1923.

Below are some photos of my Australian family. 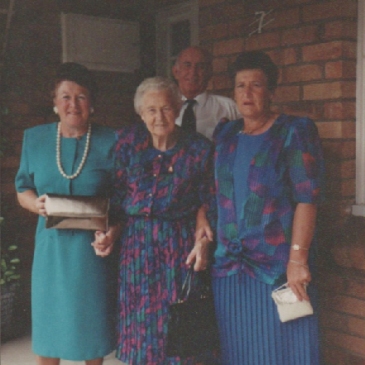 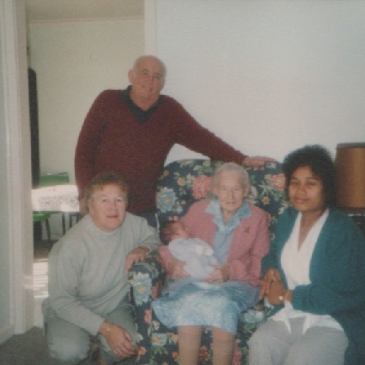 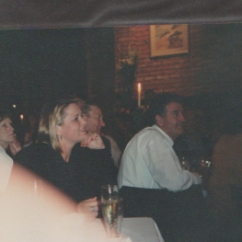 The photo below was given to me by my relative Margaret Creighton who lives in Australia. It shows my great great grandparents Charles and Emily Abram (nee  Hutchings) surrounded by many of their children and their children’s families. When Margaret gave me the photo, she told me her husband used to refer to it as ‘the pommie mafia’.  I love this photo to pieces but can absolutely see where he was coming from on this.

Margaret’s father was Reginald (Reg) Abram and is pictured on the back row of the photo. Charles and Emily who were  married in 1880, are pictured front and centre, with their youngest daughter Violet, seated in between them  Violet was born in 1906 and lived to celebrate her 100th birthday in 2006.

When asked about the photo in her 100th year, Violet re-called a number of things.   The photo was taken not long after Walter and Mabel’s wedding and one of the brothers, George had come over from America to visit. The dress that Violet wore was of blue velvet.

Charlie Abram, my great grandfather, was not in the photo because he was in Africa serving in the war.  Violet remembered that Charlie had been married prior to marrying my great grandmother Millicent May Bowers and that his first wife had been a ‘dark skinned lady’. (Records show that Joseph’s first wife was Lucy Thompson, her father was William was a gardener and her mother was called Harriet. Joseph and Lucy married on 16 April 1906).

Violet said she was about the same age as Gladys (Frank’s daughter) but Gladys had died aged 29. She noticed that Theresa, who they called Sis, wasn’t in the picture but she couldn’t remember why and that Kit and Albert’s son Sonny had also died young but was unsure at what age.  Also, that there was at least two  other siblings but that they had died – one was a female named Mary the other was a male but she did not know his name.

After the war, Charles and Emily and my great grandparents Charlie and Millicent settled in England but many of the family emigrated to Australia.  Violet re-called that Rose (Kathleen) was not in the photo as she was already in Australia – she had left with her husband, an Australian soldier, around 1919 (see newspaper article below).

Reg followed in approximately 1922 – 1923 and Louis, Bet-Martha and Violet left around Christmas 1924, arriving in Australia on 9 February 1925.  They sailed aboard the Ship Esperance Bay on it’s maiden voyage, which was later turned into a battle ship in the Second World War and sunk. Violet was only seventeen at the time and is believed to have traveled as Louis and Bet-Martha’s daughter.  George didn’t want them to go and had tried to convince them along with Charles, Emily and other family members to go to America.

Louis Bowers Abram and Delia Eileen Clarke were my grandparents on my fathers side of the family.

Delia was the daughter of Northamptonshire Police Sergeant Albert Edward William Clarke and was one of five children. Louis was the second son of Joseph Charles Abram, an Army Sergeant and Millicent May Bowers.

During the 1930’s Louis passed exams set by the East Midland Educational Union in Motor in Practical Mathematics, Workshop Science and Principles of Engineering and Engineering (Mechanical). He later worked at S and W Motors Limited where he was indentured as an apprentice from May 1931 to May 1933, as a Motor Engineer at York Ward and Rowlatt  from May 1933 to May 1934 and at Gilmour and Vale a company that manufactured engineering components.  He also worked at Vauxhall Motors in Luton, retiring in 1970 after 25 years service having established ‘an excellent reputation in respect of loyalty, conscientiousness and timekeeping’. He was a Corporal in the Royal Air Force and learnt to fly in a Tiger Moth at Sywell but war broke out on the day he was due to take his test, so he never saw active combat.

I remember visiting my grandparents at their homes in Luton and Chester. My grandad grew tomatoes in a greenhouse and to this day, I can’t smell tomatoes without thinking about him. My nan I remember would wear more than one pair of glasses at a time and also, back when we had paper money, would use the money as writing paper to work out how much she owed someone or who much they owed her. In writing this, I am surprised at how many photos of my nan I have found where she is standing, as I only really ever remember her with mobility issues  – firstly using sticks to get around and later being confined to a wheelchair.  Nan’s condition went un-diagnosed during her lifetime but today it seems likely that she could have had centronuclear myopathy like dad and I.