My great grandfather Joseph Charles Abram enlisted in the British Army on 22 January 1901 aged 19 years and five months. He worked as a Farrier Staff Sergeant (a blacksmith specialising in shoeing horses, a skill that requires not only the ability to shape and fit horseshoes, but also the ability to clean, trim, and shape a horse’s hooves) in the Army Service Corps. During his time in the army he served in South Africa, Egypt and Palestine. He left the army in 1922.

My family is fortunate to have a copy of his service record together with other mementos of his time in the army, including a brass tin (a Christmas gift from Princess Mary to those serving in the armed forces in 1914), the Christmas card that came with this,  his war medals and the Oak Leaf emblems which he received for having been mentioned in despatches on 30 December 1913 (a member of the armed forces mentioned in despatches is one whose name appears in an official report written by a superior officer, in which gallant or meritorious action in the face of the enemy is described).

Further information about the tin can be found below.

The medals are the 1914 Star, British War Medal and Victory Medal, also known as Pip, Squeak and Wilfred.

Further information about the medals can be found below.

Joseph Bowers Abram was the first child born to my great grandparents Joseph Charles and Millicent May Abram.

Growing up I remember often being told about Joseph, although at the time we did not know the child’s name, born to my great grandparents during time they had spent in South Africa. My great grandfather was stationed in Tempe, Pretoria on army service and Millicent was there with him.

There was no military conflict in South Africa that would have caused them to be there but there was a substantial military presence in South Africa following the
creation of the Union at the end of the Anglo-Boer War in 1899-1902 and some British Army units remained stationed in South Africa until the beginning of the First World War.

The British had occupied the town of Bloemfontein and Tempe became a military base – Bloemfontein, as the capital of the Boer Orange Free State Republic and a large town, was established as one of the new Union’s administrative centres and consequently had a local military garrison, Tempe. Today, the Tempe base is reported to be one of the largest Army bases in South Africa.

My grandmother recalled being shown a photograph of the child’s grave which Joseph Charles is said to have carried in his wallet but the photograph can no longer be found – the grave was surrounded by iron railings made by my great grandfather, who worked as a Farrier (a blacksmith – specialising in shoeing horses, a skill that requires not only the ability to shape and fit horseshoes, but also the ability to clean, trim, and shape a horse’s hooves).

However, for many years the search for information about the child proved to be fruitless. Requests for help locating documents or a photo of the grave ran cold. The child was nothing more than an often told family story – there was no evidence he had ever lived.

Eventually information about the child did emerge – a boy, named Joseph Bowers Abram (Joseph after his father and Bowers, his mothers maiden name) was found to have been born on 11 March 1913 – he was baptised less than a month later on 4 April 1913 in Bloemfontein Cathedral, Orange Free State, South Africa.

Sadly, Joseph lived for two short months – he died of enteritis and heart failure. Joseph and Milly May returned to England soon after. I can only imagine how it much have felt to leave their baby so far away.

Around 2009 my dad made contact with a cemetery recording project, they advised they had the following information on a  DVD.

The information he was told was taken from a headstone recording done in 1993 by Holden, P and Botha but sadly the information did not lead to a photo of the grave.

Both of us also made contact with The Commonwealth War Graves Commission. They advised their responsibility for graves in Rooidam Military Cemetery was limited to the war graves and those of soldiers from the Anglo-Boer War. The cemetery contained many private graves of the soldiers family members but many of the private memorials had deteriorated over time or disappeared and The Commonwealth War Graves Commission did not have records of the civilian burials in Rooidam Military cemetery.

A member of staff kindly visited and checked the private headstones that still existed but was unable to locate any that related to Joseph Bowers Abram which was terribly sad, as it appeared there had been a headstone in 1993.  He went on to advise that many infants appear to have been buried in a plot to the rear left of the central avenue but unfortunately few headstones remain. He sent the photograph of the cemetery below but could not confirm this was where Joseph was actually buried. 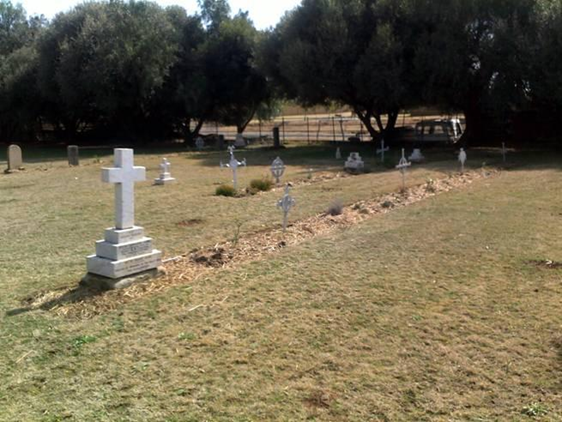 Further images of the cemetery can be found below.

Then in February 2018, when trying to pull together everything I knew into one place to write this story, I decided to do an internet search for ‘the occupation of Tempe’ – I wanted to know why my great grandfather was there and why Tempe was occupied.  I didn’t find the answers to my questions but the search did lead to me discovering four photos of the Tempe memorial which named both my great grandfather and his son. 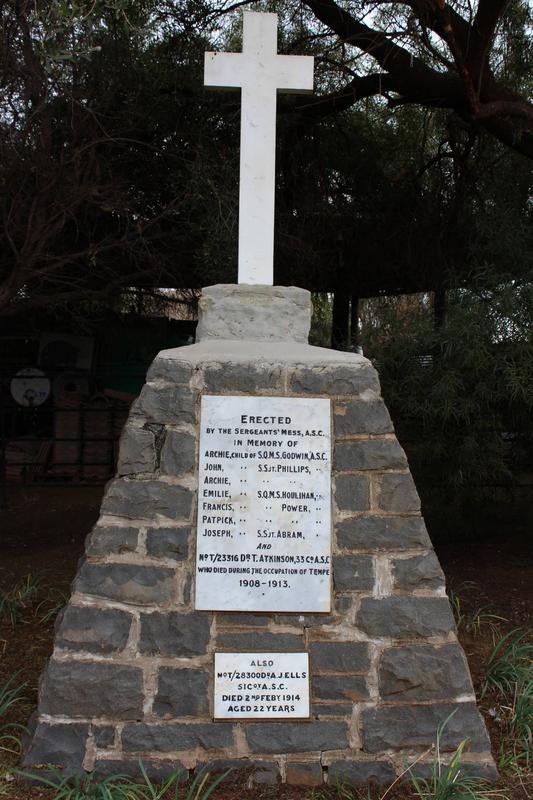 Further images of the Tempe memorial can be found below.

This was  swiftly followed by a church burial record and death entry. 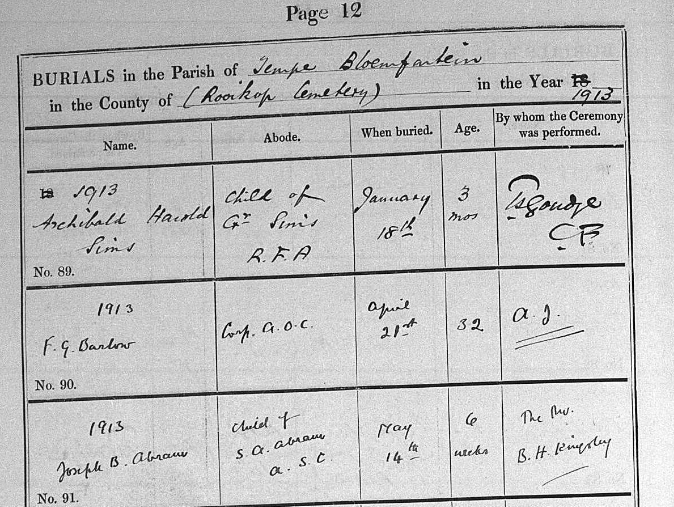 Armed with the new information I had obtained, I made contact with the South Africa War Graves Project.  They wrote back and advised that a visit to the Rooidam Cemetery had not identified the location of the grave – there are quite a few crosses with no names etc and open patches where you can see there’s a grave but no stone etc.

Updating this story in March 2018, I now believe the chance of locating an individual grave is unlikely – it has been suggested to me that there might have been an individual grave at sometime with or without a headstone. It has also been suggested to me that the graves could have been flattened and the memorial erected and/or the people named on the memorial could be buried at the site of the memorial. Whether we ever find this out remains to be seen – we may never know.

However, finally, the burial certificate shows the place where baby Joseph is buried and whilst the Tempe memorial is not the individual grave dad and I had been searching for, the memorial, clearly names Joseph and his father Staff Sergeant Abram – evidence that the baby who lived for only two short months has not been forgotten.

Many people helped in piecing together the history that appears on this page. Thank you in no particular order and hoping I haven’t missed anyone to Sandy Botha at Bloemfontein Cathedral, Terry Cawood and Glen at the South Africa War Graves Project, the eGGSA library, Cheryl Jacobs on the South African Genealogy Facebook page for providing the links to to the church burial record and the death entry, Riana le Roux, Rod Carkett at the Commonweath War Graves Commission, Rob Palmer at British Military History and the  Ministry of Defence Army Secretariat in Andover.

Joseph Charles Abram and Millicent May Bowers were my great grandparents. The couple had three children – my grandfather Louis Bowers Abram, Betty and Joseph Bowers Abram, their first son, born in Tempe, Pretoria, South Africa, in 1913, where Joseph Charles was stationed on army service.  The child lived for two short months – he died of enteritis and heart failure and is buried in South Africa.

On discharge, Joseph Charles Abram was involved in a number of projects.  He is believed to have run two pubs – the Red Lion in Stambourne, Essex (around 1924 when his daughter Betty May Abram was born) and later the Kings Arms in Woodbridge,  Suffolk (his wife Milly May Abram also had experienced of running a pub and helped her sister Kate run her pub).  Joseph built two houses at Mears Ashby Road in Earls Barton and ran Earls Barton Motors (also known as Abram’s garage) in the early 1930’s.  operating a small local service with trips to Wellingborough and back at weekends costing four pennies return. During the war the garage was used for repairing aircraft parts for Sywell aerodrome and in March 1943 the garage sustained a broken window when two Air Force Bombers collided and crashed.